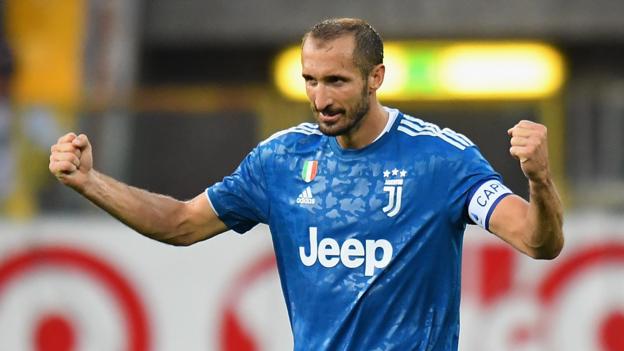 Yesterday,  Juve were dealt a devastating blow, and no it wasn’t finding out their Champions League group. It was the announcement that their captain and star defender, Giorgio Chiellini, tore his ACL during training. This will have a huge impact on Juve’s squad and may hinder their performance as a whole. However, one of the questions to ask is whether Juventus can cope without him for so long, given their current squad.

Chiellini’s absence from Juve’s squad will have a huge impact on them tactically and mentally. First of all, it’ll possess a huge impact on their ability to defend. Chiellini is a crucial player for Juve, not just because he reads the game so well or defends at a worldclass level. He is the only defender that Juve has that does not push so high up the pitch when they’re attacking. He rarely ever gets caught for being too high up the pitch and Juve needs that. This is because while Bonucci and De Ligt are both great defenders, they tend to like to get more involved with play high up the pitch, which leads to them being exposed on the counterattack. Also, it’s no secret that their abilities to defend don’t compare to Chiellini’s skills at this position. Another way Chiellini’s absence will affect Juve’s backline as well as the general squad is the leadership that will be missing when he’s gone. Chiellini is Mr. Juventus, as he’s been playing at the club since he was a child. He rose up through the youth ranks and is now a true leader that the bianconeri will miss on the pitch.

Can Juve Cope With Chiellini’s Absence?

As a Juve fan, the thought of Bonucci being without Chiellini as his centreback partner scares me. Last time Chiellini was absent from the field, Bonucci led Juventus’s backline and they got eliminated by Ajax in the Champions League quarterfinals in 2019.  However, Juve did end up buying Ajax’s brightest young centreback, Matthijs De Ligt, during the summer. He will definitely help make up for that absence a little bit. However, without a defender like Chiellini, it’ll be almost impossible for them to win the Champions League this season. Without Chiellini, it’ll be tougher to cope in all three competitions that they’ll compete in this season. I hope it ends up working out for Juve.

I am really hoping that Chiellini will return during the season to help Juve win all the competitions their competing in. However, it’ll be a massive adjustment and Maurizio Sarri will need to get his squad to adapt if in fact, Chiellini will be out for as long as they say he’s out.

2 thoughts on “Chiellini’s Injured, Now What?”